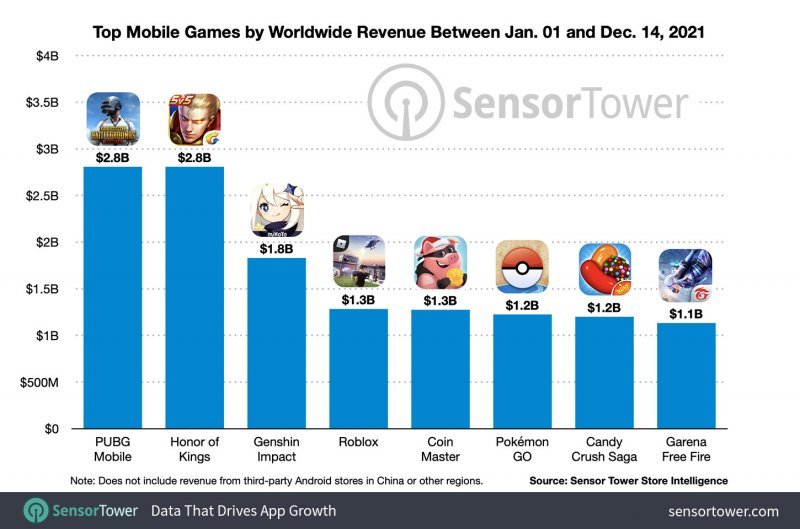 Over the course of 2021, eight mobile games generated record revenues of more than $ 1 million each. To detect these data was the analysis company of the mobile market Sensor Tower, which also compiled a real ranking with the actual revenues of the individual games.

Eight mobile games with more than $ 1 billion in revenue in 2021
In first place we find PUBG Mobile by Tencent with 2.8 billion dollars, thanks to a widespread diffusion in markets such as the Chinese one (where it is called Game For Peace) and Indian (where it is known as Battlegrounds Mobile). In second place, again with 2.8 billion dollars and always from Tencent, is Honor of Kings. Both games are up from the previous year: by 9% and 14.7%, respectively.

The third position is more detached, but still impressive: we find Genshin Impact of the Chinese miHoYo, with its 1.8 billion dollars, which continues to grind successes, thanks to continuous updates. Just think that with the September update alone, player spending has increased fivefold.

At number 4 comes the inevitable Roblox, with 1.3 billion dollars, while in fifth position is Moon Active’s Coin Master, again with 1.3 billion dollars and a growth of 13.8% year on year. Followed by Niantic’s Pokémon GO, King’s Candy Crush Saga and Garena’s Garena Free Fire, with the latter closing the ranking of billionaire games. Cygames’ Uma Musume Pretty Derby came close to entering the rankings with $ 965 million, but didn’t make it. Of course, its result is as impressive as that of the others, considering that it is available in only one territory (Japan).

For the sake of comparison, in 2020 there were only five mobile games that had exceeded one billion dollars in revenues, all also present in the 2021 ranking: PUBG Mobile, Honor of Kings, Pokémon GO, Coin Master and Roblox.

Consider that we are only talking about mobile versions, so some games are not considered the revenues of the other versions, such as PC and console (which however do not have the same impact). After all, the mobile market is now the driving force of the industry. Sensor Tower predicts that in 2021 alone it will produce $ 89.6 billion between the App Store and Google Play, with a growth of 12.6% year on year. A huge amount.