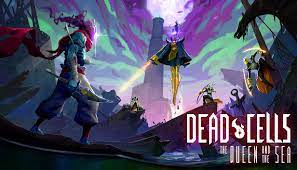 Dead Cells’ new DLC, The Queen and the Sea, has a release date, announced in a new trailer: January 6, 2022. This is the content that will conclude the journey started years ago with The Bad Seed and Fatal Falls, the other two major DLCs of the game, with which it will form a real trilogy.

Among the new contents stand out a new boss, which according to the developers will surprise the players and new levels, one of which is completely different from what has been seen so far in Dead Cells. Also, concluding the DLC will lead to a new ending.

The release date announcement video shows some of the new content, including the two new biomes, alternatives to High Peak Castle and Hand of the King.

The first unreleased biome is called The Infested Shipwreck and, as the name implies, is set in the carcass of a wrecked ship full of enemies that look like they came out of a Lovecraft book. Can we survive this hell of spikes and traps? To make it we will have to count on new weapons, including a trident, a pirate hook and a shark (don’t ask yourself ed).

The second biome is called Lighthouse and is a large lighthouse, which will be reached from the previous biome. Here you will have to make your way along a vertically built level, full of mini bosses to take out. Will we be able to survive?

If we make it we will reach the top of the lighthouse, where the new boss, The Crown, is located. By defeating him we will finally be able to escape from the island and see the new ending.